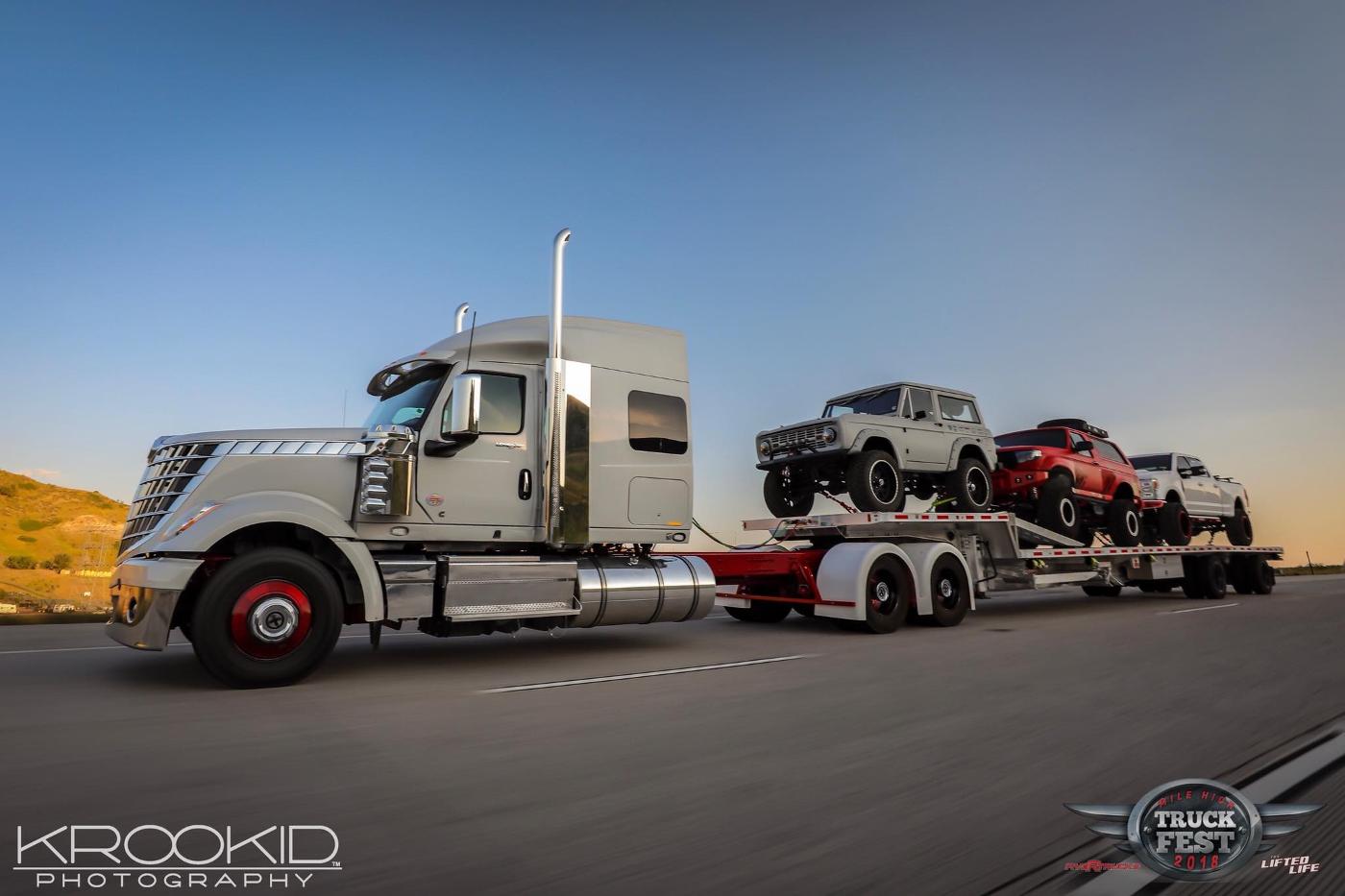 His tractor trailer runs on ATX wheels from American Racing.  Like every Five R Trucks’ project, they’re built for the long haul with a design that looks as mean as it is tough.

“We’re a niche company,” said Hill, “but we have an unbelievably loyal following.  “We always do a truck tour, to promote the kind of work we do, which means hauling 4X4’s all over the country.  We depend on ATX wheels for durability, performance and especially style.  They match what we’re all about.”

“We don’t use parts or product unless they’re the best,” added Hill.  “That’s why we run ATX wheels on our hauler.”

Five R Trucks does total conversions, tricking out customer rides with everything from suspension, paint jobs and fancy bumpers to lighting, running boards and tire and wheel combos.  “Our trucks are kings of the highway,” adds Hill.  “They can go anywhere in style, carrying everything from big work trailers and machines to snowmobiles, ATVs and anything else you want to carry.”

“We cater to all kinds of people who think climbing up into the cab is way better than just sliding in,” he said.  “Our customers are addicted to the lift and everything that comes with it .”

Five R Trucks ship their creations all over the planet and their vehicles are regularly featured on the covers of the industry’s most popular trade magazines.  The company, via the added publicity gained from Velocity Channel’s Lifted Life TV show, is now known and respected as the world’s premier 4X4 build resource.

When the show’s producer first approached Hill with the idea, he was not interested. He couldn’t see the appeal of something he finds so ordinary. Besides, he said, “reality shows are fake, most of ’em are scripted.”

Eventually, he agreed, and both cast and crew say this is one of the most “real” reality shows they’ve witnessed. Unlike some manufactured series, designed around bickering personalities, this one documents an actual process.

“There is always a great story behind all of our customers and their builds. There is no need for fabricated drama; the story and the build are the centerpiece of each episode,” said Hill. “For example, just getting the build’s parts in on time for filming is like a symphony in motion.”

The company is not being paid for their participation in “The Lifted Life,” but the exposure is probably worth more than money could buy. (“Buy a T-shirt!” Hill said.)

The soft-spoken, unpretentious Hill, 59, was born and raised in Golden at the trailer court where the Days Inn sits. “My dad planted one of those trees that are still there,” he said, pointing.

Hill started selling trailers before he was out of high school and that business evolved into Five R. He launched the custom truck shop in 1982. As his boys Jake and TJ grew up around the shop they became an integral part of the businesses success, and today Five R Trucks which now counts revenues of $10 million a year.

At 88, Steve’s dad, patriarch Hubert Hill still comes to work six days a week. Jake and TJ are always working with the customers.  The entire Hill family seem to find pleasure in their work and genuinely enjoy working with each other.